We have arrived at the week of Christmas!  I took this week off of work, which I have not done in years.  Usually I stick around because it was important to other staff to have the days to travel or be with children.  Now I have a child who wants Mom home for some of the time with him, especially since there are two full weeks off this year from school, and I don’t have the heart to throw him in care the entire time, and I am privileged enough to have that choice.  And I want to get him started with playing with his Christmas gifts, which I always select as a little above his age so he has more time enjoying them.  If I let him choose his gifts the house would be filled with even more wheeled vehicles that he ignores.  Maybe some toy food that he also will never play with.  Drives me crazy.  But the trade off is I have to spend time orienting him to playing with them and giving him some ideas to start with.  So I’ll do that on my Christmas week off with my sweet not so baby boy.

I usually take time off to spend time to myself, so I hope I get a chance to rest, too.  I’ve been a little burned out this year, going through the motions a little bit to keep to the traditions, but not making myself nutty on doing every Christmas thing I see for children on my Facebook feed.  It is too easy these days to feel you have to do ALL OF IT, even though my son has enjoyed the small town Christmas traditions here just fine, without my having to drive hours and spend lots of money and valuable, oh so valuable, energy.  He’s plenty happy and looking forward to Santa.  He’s not asking why we have not made it to the alpaca farm an hour away for Christmas celebrations.  Although it looks super cute and I want to make it up there some year.

These are the last two books of the Christmas Reads post.  I kind of crapped out on Christmas books, like, ten days ago and I have been back to reading ghost stories, which I have done before at Christmas and now I’m seeing was a thing anyway back in the day, and getting a jump on my next year’s goals, which I will talk about in a later post.  I have other neglected Christmas reads sitting in my audio and books that will get their turn next year. 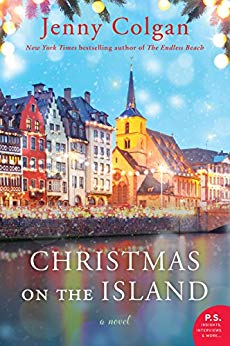 Christmas on the Island, Jenny Colgan

A small community on a tiny Scottish island have a Christmas filled with love, misunderstandings, some family reconciliation and some letting go.  A woman with an unexpected pregnancy, a refugee doctor serving on the island, and a dying man who has long turned away from his rejecting family comprise three plotlines in the darkness leading up to Christmas on the cold, dark, close knit island where everyone knows everyone’s business. It reads like it probably follows other stories with this setting and this cast of characters.  The audio was shorter than eight hours but it packed a lot into those hours!

So, this was not to be counted under my lighthearted romances posted a few weeks back.  No, sir. I bought this over the summer with Amazon birthday money because of my dearth of Christmas audio last year and then looking at my prospective reads with those heavy plotlines I was like dude did I just find this appealing because it has to do with a place I’ve always wanted to visit?  These are not lighthearted misunderstandings. This is not Holly Martin. Why didn’t I get Holly? I’m not saying I didn’t wonder this occasionally as I talked myself into starting this. It’s been slow getting myself into Christmas this year despite my reads and all the dang snow and I did end up enjoying the story and the people and getting sucked in, I know I always say that, and the heavy themes were well done.  They were not overdone, maudlin or brushed over. It’s the realities of people’s Christmases, and that has worth too. I have Christmases ahead of me dealing with the losses I haven’t had to experience yet.

Also, the narration is with a Scottish accent, which is so excellent, that even in a bad part where there’s swearing I can’t get enough of the accent swearing.  It adds so much to this book. I find that books that take place in the British Isles just have to be done in audio:  Royal Spyness, Milkman, theScottish historical shorts I read last year, they all need to be done in the appropriate narration. Just have to be.

A newspaper reporter, adopted and alone in the world after her mother passes, stumbles on a story about anonymously given jars of money given to those in need at Christmas.  She is torn between keeping the story anonymous, as are the wishes of the family who started the tradition and who have become a second family to her, and hitting it big with this story for her newspaper career.

This is not a long story, which given my Christmas story/season burnout is a good thing.  It’s a diverting story, going between some depressing pieces and then the sweeter, almost saccharine parts, with the family that she finds and how she becomes part of them.  The tension over her decision to out the family’s Christmas tradition isn’t overwhelming, and there is a lot of telling of a story, rather than showing.  This book is for people who want something short and heartwarming for the holiday.  I can see it being the kind of book that people would return to annually for a Christmas reading to catch the spirit of the season.  So, after the heaviness of the previous read, it was a good way to finish up my reads for the season.  Even though I didn’t know I was finishing my reads, I didn’t know that I would read more of the MR James collection I dabble in when I am between books or not in the mood for audio rather than putting on another Christmas read.  It happens.

At least one more post this year!  I have to decide if I am tossing in the book of poetry I read for BookRiot in an end of year post, or if I do do a specific end of year post, which I don’t even know what that will be about, maybe what I liked reading this year, but as my readers know often doesn’t follow publishing trends so can be random.  Maybe something I liked especially out of BookRiot.

New Year’s reading goals will, of course, be saved for the first post in the new decade.  Just try to contain yourselves until then (she said with great sarcasm).