Popsugar came out with their 2019 list and I love it!  No celebrity memoirs on it!  Very little if any duplication of categories!  Popsugar might have won me back.  Very possibly.  But a quick google sweep reveals that BookRiot has not come out with theirs yet, or Modern Mrs. Darcy.  Popsugar could clinch the advantage with my planning my reading for them earlier than other lists, but I have to see.  I have to make an informed assessment.

That might be the only non book review item of this post that I am happy about.

I haven’t gotten through my Essay Anthology category yet for BookRiot 2018.  I have tried a few times to select something.  Nothing has worked yet.  I got out one from the library and I didn’t even open it before it had to be returned.  Now that it’s time for Christmas reads, I am going to be pushing it close this year.  Has anyone out there done theirs and would recommend it?  I think I need one on audio to get me rolling.

It already has snowed here considerably twice and it’s not Thanksgiving for days.  I haven’t even bought my requested dinner contribution ingredients yet and my son has already had a snow day. So spring comes sooner?  Usually we don’t get the first major snow dump until the week of or after.  My son has already gotten out on his sled, though.  Because childhood winter magic.

Goodreads is having their semifinal round of their 2018 Goodreads Choice Awards and I haven’t read any of the new books up for voting.  Not even in YA Fantasy and Science Fiction.  I slowed down my reading this year to novel, and I do have 82000 more words written than I had last year at this time, so that’s a decent tradeoff.  I’ll take it.

But still.  I got nothing to say about the new stuff this year because I didn’t read it.  Popsugar 2019 has a book you didn’t get to in 2018 and I’ll have about 15 things to read for that.  Hopefully some of them go on sale at the end of the year on Amazon, like I have won at in the past.

More specifically bookishly for me, the books reviewed today are ones I read as November deepened. They are both mystical.  Love and connection through both sides of the veil. Family tragedy and heartbreak.

In the Blue Hour, Elizabeth Hall

I really didn’t know what to read after my magic/scary/witches binge and I wasn’t ready for the pile of Christmas cozies that have somehow found their way onto my kindle.  I accidentally tapped on this to download the audiobook and it was the perfect middle ground. Early November, to me, is the blue hour, the dusk of the year, the time when the veil between the worlds is the thinnest.  It was fitting.

A woman who loses her life partner feels that she is getting signs from him from the other side that she goes on a trip to make sense of, complete with some mystery around a medium that she befriends who encourages her to make the trip.  There is Native American mysticism and Hoodoo and questions about relying on her own intuition, with characters in there to heap on the skepticism.  It’s about a woman who has not been on her own for years finding herself and finding family.

The backstories could get repetitive at times, not only for the main character’s story, and this story does have a plot, but it has so much to say about spiritualism, a topic I love, I still really enjoyed this book.  It didn’t have just her story of belief but many others to balance out the narrative.  If you like stories about family and beliefs about the other side of the veil, it’s definitely worth the read. 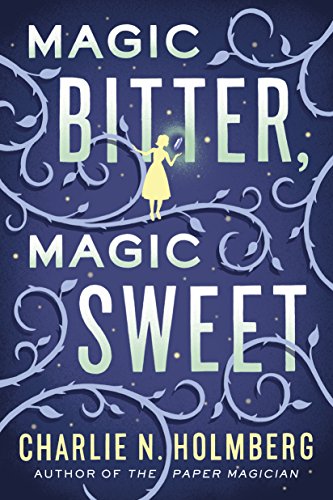 I must have read the synopsis at some point on this book and my brain turned it into something else.  She makes magic through baked goods.  How fun is that? There are lots of cozies out there centered around baking.  Should be a little cozy, right?

Nope, it was dark. It takes place in a world where there are marauders and slaves, and the main character is wandering around in the world with no memory and a ghost that starts appearing that doesn’t tell her much, and then she is bought by a cruel and unpredictable master who uses her baking for nefarious purposes.  Then the backstory comes out and that has its own darkness to it, even though it is about love in the end.  And creation.

It made me pick up The Plastic Magician, though, the fourth in the Paper Magician series. Magic Bitter, Magic Sweet may have been different from her other work, but it says something that I wanted to pick up her other book when I was done. I figure I’ll eventually get to most of her books.

So, Christmas reads are next, starting this weekend with reading when I finish The Plastic Magician.   I might have to actually buy some audiobook companions because I listened to most of my library’s last year.  Oops.  But with next Sunday officially falling in the Christmas season, it will be time to hop to.

If anyone has any help with the essay anthology category, I appreciate input.