I have to keep reminding myself that I crave summer all the other months of the year when the unrelenting heat rolls in.  Most of the time it’s not difficult to love every moment of the season, even on the comforting rainy days, but when it feels sweltering day after day even I start craving the cooler weather again, and that is saying something.

Also of note:  took advantage of the Prime deal of buying almost any ebook and getting thirty percent of the cost of that book off another book.  I got Kafka on the Shore by Haruki Murakami in tight runnings with The Blind Assassin by Margaret Atwood or The House at Riverton by Kate Morton.  Feel free to comment on my choices.  With my credit I found a book on my wish list on that magical deep amazon discount and got it for nothing!  It’s a scary book and I am contemplating if I need to do a third year of scary book posts so that identity shall remain hidden.

Today’s book is like last week’s book:  not so much a re-telling, but more a repurposing of characters.  Kinda like upcycling, but the original hasn’t exactly been discarded.  And, speaking of upcycling, a stand that I sanded and painted and put other handles on to make into a nightstand fifteen years ago has found a home in my she shed, all over again.  She shed could also be ready for blog show off.  My husband has to put out the electricity but that won’t change the aesthetics of a pictures!  The heat has made me spend less time out there than I would, too, as I don’t have a way to turn on the ceiling fan.  Yet.

But repurposing.  Jane Eyre was also repurposed in Texts from Jane Eyre, which is entirely a hilarious creation of imagined text conversations between famous literary characters.  She’s pretty easy to repurpose, being strong in her principles and very clear as to have survived all these years as a literary heroine.  She lends herself well to a new coat of paint, commenting on a current social situation that you well know her principles would not allow her to either be neutral about or keep quiet.  Like, who wouldn’t want her blogging about the president right about now?  Epic. 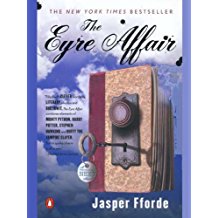 This was a re-read.  It was a gift in graduate school and I read it on a solo flight to Iowa to interview for an internship.  I had read Jane Eyre by that point, but this book has a lot going on in it past the Jane Eyre part and I felt back then, in 2007, that it would need another go round.  And it did, even though it was ten plus years later.

This novel takes place in a world where there is still a war being fought with England and characters can come in and out of books, people can slip in and out of time spaces, and just a magical realism sort of world in that magical occurrences are just accepted to be the way of things.  Kind of sci fi with the being able to mess with time and jump into the dimensions of the plot lines of novels or pages of poetry.  Amazon says it’s more alternative history and satire, which, I could see that.  It’s just as I was writing this I was wondering if I shouldn’t have included it with some pending sci fi posts I have on the burner.   But, it is for my re-telling/re-purposing theme and there it will stay.

The protagonist actually has more doings with Rochester than Jane.  When she initially falls into the manuscript at a young age, it is the scene where he meets Jane that she falls into, and he has a lot of time in the book where he is not featured so I guess he has time to step out of the book and get involved in events of this world, like a show down the protagonist Thursday has with the villain Acheron, who is stealing characters out of manuscripts with which to otherwise manipulate the world.   She has more direct talks with him during scenes that he isn’t involved with. I do like that their actions change the end of Jane Eyre and having read it I was interested to remember how they did it.  I thought that added something to the book other than Thursday just trying to defeat the challenging and taunting villain with all sorts of powers and abilities as well as trying to get her own life straightened out.

The book can get a little complicated with political discussions, time/space issues, characters in poems and novels, rules of the magic, silly inventions and a tangly past romance.  There isn’t a wonder that I thought I needed another go round after 2007, but most of the best novels are like that.

I thought this would have more literary references that I would understand better now, but the bulk of the references are Shakespeare, and I have never liked him and I have never grown an appreciation later on as an adult. I still feel like these works intended for common and base entertainment are being upheld as real literature.  Like if people hundreds of years from now found episodes of Jersey Shore or Flavor of Love and made all children familiar with them as part of compulsory education.  That’s what it feels like to me.  But I did like the debate over if Shakes really wrote all these plays.

But it needed a revisit and I am glad I did.

She shed pictures to be revealed soon!  As well as more BookRiot categories.  I like the re-tellings but I can’t help myself when there is a reading list.  I just can’t.