The point of healing from trauma is not forgetting the trauma happened, but allowing oneself to process what happened in as much detail as is tolerable and then considering the ways in which it shaped us and will always be a part of us.  And respecting it.

The same applies with the collective trauma that we experienced in becoming the nation we are today.   The trauma that became the reason behind our laws and regulations. Our systems.

I am wondering if this is why Colson Whitehead’s The Underground Railroad not only won this year’s Pulitzer and National Book Award,  but also is on the long list for the Man Booker Prize. 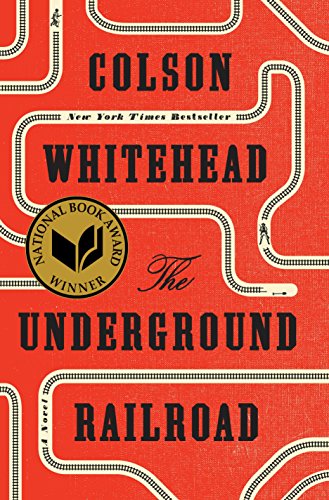 Also I am wondering why my summer reads this year are books that will help me recover from my first world problems.  I picked up another book to alternate with this heart wrenching tale for some breaks to find out that book was heavy as lead, too.  No rest for the wicked, or the privileged, I guess.

This book is exactly what the title says:  a narrative about a slave trying to survive her way to freedom via the actual underground railroad.  It illuminates attitudes on both sides of the slavery debate, even those of people who think they are being enlightened, but who in the end were almost as scary as the infamous and terrifying slave catcher.  It brings into sharp focus what these slaves lives were like: the realization of hardship that crashed early and fast, taking the light from children’s eyes before they are ten years old.  The main character evolves with the stages of her own journey to freedom:  a woman who was “a stray herself” from the beginning of the novel trying to find her home, free of bondage, where she can love and belong.

That said, I am wondering what is so exactly special about this book to make it worthy of two, possibly three of the highest book accolades there are.  It is powerful and well written, but we are pretty heavy as it is on the slave narratives.  I feel that Between the World and Me was more illuminating, as slavery is covered in the US History classes I took, but the effects of modern racism, even to this day, I have not encountered so much in formal studies.  It hides itself better today.  And I am careful of it in my work as a therapist.  I asked the people who go through it what it is like for them today, in this time and place.

But The Underground Railroad feels like this has already been done.  Maybe because those who decide the prize feel that it is done better than the narratives there are out there.  I mean, I don’t decide literary prizes and I don’t feel qualified to do so.

Do I recommend this book? Absolutely.  I think it should be assigned, or parts of it, for high school students taking US History.  I read Uncle Tom’s Cabin in that class instead. I just think that something hogging the major awards should have some aspect that is more overtly different, a different juxtaposition.  I don’t know.  It will probably win Man Booker too and make me look like a fool.  I understand why The Sellout won Man Booker last year.  It was brilliant in its satire of race. I have not read the other contenders for last year’s prize, but it would take a lot to change my mind.   I just feel that there was something more eye opening to me from Between the World and Me and The Sellout than The Underground Railroad provided.

I was sneaking in books about white people on the side all along.  I won’t play like I wasn’t.

Comments/likes/shares!  Tell me I am a fool if there is something missing. I am willing to hear alternate points.  Especially since I am using a whole post for one book, which is rare, just to say, how is this book, exactly, special? Ha.