Despite the title of this post, I am going to keep my discussion of my recent first world problems to a minimum.  They are even more embarrassing after reading through some of my accumulated books on the Second World War.

My reading personality is an Explorer. I like to build empathy and see the world from other people’s perspectives as I ride on the SUP I got for my birthday and have the health and time to train enough to do well in local triathlons and knit for fun with luxury yarn.  Some of it is charity knitting, to be fair.

The thing that is depressing about both of these beautiful second world war novels is that it is sad to die in the war, and sometimes it can be as sad and anticlimactic to survive it. 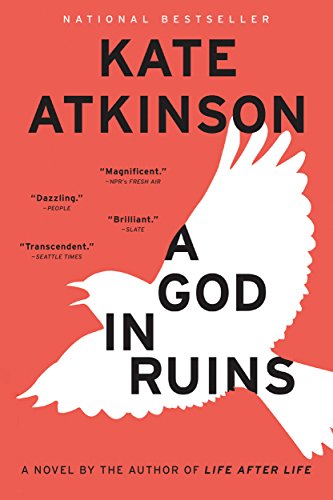 A God in Ruins, Kate Atkinson

I loved Life After Life.  I believe I have shared this sentiment on the blog already.  This is meant not as a sequel but as a companion piece to that novel, according to Atkinson. I think she could not bear to leave her characters after writing Life After Life.  She chose the perspective of Teddy, or Edward, Todd, the most loved and lovable of the Todd sons, to flesh out his story and participation in the war as a fighter pilot.   Excellent choice to choose the most sympathetic character, but I wondered about her choices in spinning him out into a daughter, Viola,  who is not likable in the least.  Atkinson does not try to make her appealing in any aspect: she is immature, greedy, self centered, and hopelessly unable to make herself happy or be satisfied, even before the death of her mother when she was a kid.  And much of the story is hers, especially earlier on in the novel.  I really wondered about Atkinson’s choice in this.  I need tension from a novel, that is true, but I like tension from a character I like.  The story is enough about Teddy himself and his participation in the war and the original family cast of characters to keep me interested in the parts about his daughter, and especially in the parts where he is a loving grandfather to rescue his grandchildren from the complete ruin of their disaster parents.  Viola takes a decent stab at redemption but his grandchildren adore him long past my caring about her and what she does, and that makes her bearable.

This novel is not just depressing in the production of the daughter Viola but also in that Teddy’s real actualization in life is centered around the war.  He is aimless before and aimless after, engulfed in a typical British tedium (and I say typical just because of the other British books I have read) devoid of a certain amount of action and passion.  And then he lives on to his own ruin, a depressing ending to a hero in the war, in the midst of a generation who never had to participate in the war and question his morals in doing so. It’s kinda heart wrenching.  You like Teddy, you want him to find more after his participation in the RAF from life than puttering around and being the target of his daughter’s dissatisfaction with everything.

But, because Atkinson is a true artist, I still loved it.  I am still glad I read it.  I should have read it sooner.  I love the story of the Todd family and all the iterations that Ursula lives through. I love how she chose to end A God in Ruins.  It reminded me of my love of the story as the final note. 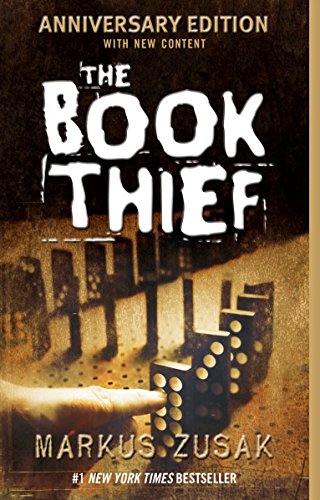 This one really gnawed at any lack of appreciation I was harboring toward my life.  A little girl in Nazi Germany taken into a foster home because her mother is too ill to care for her but not before her brother dies on the way to their new family.  No, that has to happen first.  She has to be ten years old and totally alone in the world. And death is narrating one of the most deadly periods in history.

Zusak makes it beautiful, though, because Liesel thrives in a terrible time and devastated place.  She is resilient.  She is lovable and kind and works hard and wants to do good things.  Yes, she steals books, but it is to feel whole.  Books are her survival and I can totally relate to that.  She comes of age in a scary time where survival is at a premium, and she experiences her own layers of trauma.  Liesel survives and makes a happy life for herself, but will have the demons from the war cling to her forever.

It’s that important YA that can make teenagers stop and think about what things must really have been like at that time and place.  I am a firm believer in appreciation and I am sure these books reminded me to do a little more appreciating.

I was going to say I won’t watch the movie, and I don’t watch a lot of movies, but this one could possibly be an exception.  I might not be able to promise that.

I loved both of these stories, but I am recovering from them by changing tracks with my reading.   I have three more WWII novels and I can’t do five in a row or I will be threatened with collapse.  On my SUP.  I liked how it worked out that I read books on the same topic from two different points of view, but in some ways, these views were very much the same.

I may have given up resisting Reading Challenges, even though I have had other, competing plans of how I am going to shape my reading.  Because it needs a shape.