There are some books on my TBR that have tarried there far too long.  Had way too many cups of coffee whilst killing time in purgatory.  Or maybe a beer.  Or a hundred beers.

These are the modern books that are good for me, not just the dusty classics into which this blog wanders from time to time.  The award winners that I have sometimes passed over when I don’t want to use my brain as much or the ones that seem to constantly dangle in front of me, strongly recommended.  Books that any self respecting book blogger logged long ago and that I admit I am just getting to now.

I own my guilt but I also am a firm believer that every book in its time.  A book gets read when it is time for me to read it, not necessarily when it hits the award list or keeps showing up on some of the book sites I troll.   Or even when my price stalking ends in a 1.99 victory with 3.99 companion audio.

Everything I Never Told You, Celeste Ng

I may have climbed into this novel now as I have a child coming up on the age where he can better understand what larger things I might want for him.  Better understand, not completely.

This novel is about two parents who focus all their unrealized fantasies on a daughter who dies as at the opening of the novel, mysteriously, in the middle of her teenage years.  It is about the dead daughter but it isn’t, too: it’s about how people’s unchecked dreams can spin out into dysfunction for all involved.  Parents whose issues prevent separation/individuation, instead creating a lens through which they view a chosen child as a vessel for their unrealized hopes and dreams, some weird sort of second chance. It’s messed up, but the stories of how it really gets so messed up are engrossing and relatable.

The book is also about what it was like to be different in the not so distant past, where people were expected to marry and procreate within their race and their children being able to fit neatly into the scheme of things, the status quo.  Neither parent in the book is the status quo:  a brilliant mother with the ability and ambition to attend medical school and rejecting her assigned housewife role, the Asian man who makes it in the Caucasian world of academia.  It’s not difficult for me to be who I want to be in my environment, but I can’t forget the people who have to defend their right to be who they want to be when it flies in the face of convention.  Grad school did not have the extra layer of suck that it has had for women in the past. And I came across plenty of women in my higher education who were getting degrees even though they were becoming mothers or already mothers.  The repression of times past created so much yearning and sadness. And here I am with an advanced degree, a full time career, and am a shining beacon of parenting that involves likely too much sodium and the unconditional support of Netflix. And my contentment with my world is pretty solid. 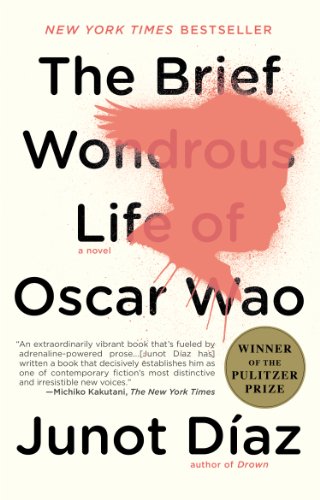 I have to admit my burnout on Latin American novels, and the fact that this had the same audio narrator as The Shadow of the Wind did not help.  For some reason I was not expecting this to be similar to the other Latin American novels I have read, and in some parts it was more Americanized and contemporary, and in other parts I felt I was back in the pages of Marquez, Allende, or Zafon.  I mean, Diaz is in good company with that trifecta, but one has to be in the mood to read about the Latin American political intrigue and family curses un-spooling over generations just to end in a glorious burning crash for the characters you spend the most time getting to care about.  I was not sure I was completely game for the inferno, but in the same vein Diaz’ artistry was not entirely lost on me. It deserved the Pulitzer.  I mean, I still don’t get how A Visit from the Goon Squad won one, and I did not get far into Gilead before I abandoned it, but this, yeah, I can see it.  I also liked Middlesex and The Shipping News, and I could fawn over All The Light We Cannot See to the point of being annoying.

I was rooting for the ghetto nerd.  I am immensely satisfied that it did not end with his attempted suicide.  Is that a spoiler? I hope not.  I mean, it won the prize in 2008, I don’t know what other serious reader in the world has not gotten to it yet.

The journey of too long neglected books continues next week with my wandering out of my usual genres into some newer territory.

I turn a year older in this upcoming week, but at least I won my age group in my first triathlon (sprint) this summer 🙂