I believe I have admitted to my readers that I once loved autumn.  I loved it when the months of snow following did not challenge my ability to see family and friends as much as I wanted to.

But despite my wizened, potential snowbird state, I can enjoy the scary season for all the scary books that it involves and am dedicating these five Sundays in October to scary reads:  Gothic, haunted houses, demons, and the like.

When I did my Basic Gothic Reader post I knew that I would want to follow up with more Goth reading.  Today features two Gothic novels, both mentioning in the subtitles that they are “romances”.  I would agree that one is actually a romantic story while the other is absolutely not. 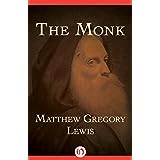 The cover I have here does not have the fateful subtitle of “A Romance” but some editions do. This book is not about love.  It is about lust, rape and meaningless sexual conquest in the main storyline.  The protagonist goes from a pillar of virtue, free even from temptation to vice, into the most base of creatures.  It is a classic Gothic cautionary tale, although the forces of good and evil are usually balanced out just a smidge more than they are in this one, which focuses on evil.  There is another side story that has a little bit more of the good and valiant.  And yes, the good wins in that one.

The Castle of Otranto still predates this 1796 book, and like Castle, The Monk has all the elements of the genre:  the supernatural, prophecies, good and evil, castles, heaps of scandal, wicked actions leading to bad consequences, some demons and the devil, and ghosts.  And, true to the genre, the women in this book have three purposes: to be ornamental, to remain virgins for marriage, and to get bossed around by scheming men.  There is seriously a character in here, who after she is raped, knows that the best way to continue to live her life is hidden away from society so others will not be exposed to her sinful nature.  All marriage prospects are ruined because she was raped.

But maybe in her confining roles a woman can be happy:

I was not going to leap into another Ann Radcliffe right after The Mysteries of Udolpho, which was good, but had copious irrelevant backstory and was so treacherously long.  I don’t mind a hefty tome but sometimes I struggle when I am wondering where the story is in my twenty first century brain. This one was better because it was a lot shorter.  It was published four years before Mysteries so maybe she was just warming up!

This one is a love story because a pair discover that they are in love and have to dodge obstacles to be united forever in love.  Purely Gothic obstacles, of course: Julia’s scheming father, evil stepmother, a big castle that they believe might be haunted in a neglected and crumbling spot, sinister fiance, packs of raiding banditti, convent drama (it does exist). External, high drama obstacles, stakes heightened because Julia is just a pawn of the men around her and she must get to be with the one who cares about her thoughts and feelings.  Not like, Julia gets accepted to Yale Law but Hippolitus is going to be backpacking through Europe and wants her to take a year off with him to find himself and can’t promise fidelity if he is alone overseas. And of course Radcliffe makes an explicit statement at the end to drive it home that virtue is always rewarded. Ms. Radcliffe is a woman after my own heart, being a woman who wrote to entertain herself.

I do want to do The Castles of Athlin and Dunbayne, which I was going to do first but then read A Sicilian Romance  so I could post two Gothic romances together in my five scary themed blog posts for October. I had already read The Monk for a reading challenge category of a book more than a hundred years older than me, and I wanted to count Don Quixote in the longer category.