Another way to read more widely is to read what others ask you to read, however begrudgingly.  I rarely, if ever, ask for recommendations, although I am the first one to blow up some poor shmuck’s comment feed on Facebook when they are fool enough to canvas hundreds of people at a time as to what they should read next.  I will keep in mind what someone wants me to read but it has to depend on my mood when it actually gets cracked.

That is likely why MMD and Popsugar this year want you to pick up a book that someone else thinks you should.

A Book Recommended by Someone You Just Met (Popsugar):

A coworker that I trained with and become friends with recommended this one.  The pace at which we meet new people, and especially make personal friends, slows considerably in the establishment of adulthood.  So I am counting this because she harassed me until I read it and I have only known her for two years. I also read it because she read The Martian when I was talking about it at work.  Yeah, I am exciting in real life, too.

The cover of this book is atrocious and I cannot discuss it’s merits until that is said. I find I need so much more encouragement (other bloggers praise, Amazon stars, listed for book awards and dangled in front of me by the publishers I follow) to pick something up if the cover is cheesy.  I showed it to my husband and he said, “sweet deer on the front.”

Hobb writes trilogies and I probably will at some point read the other two of the Farseer Trilogy. The story is good but I am glad there is more to it because I feel like the ending is anti-climactic, on top of the fact that the main character continues to be lonely at the end. He has some reprieves from loneliness but nothing permanent due to the belabored point of his bastard birth. Without a specific origin to assign him a place in the world, he ends up being the projects of a few people. He does not even really have a name throughout.  It is an interesting story and you root for the protagonist as he passes through the many sets of hands who are trying to shape him.  He definitely will need more permanent and stable relationships in the other two books to keep me wanting to follow his story, so hopefully his lack of origin is resolved.

A Book Recommended by a Family Member (Popsugar):

The Girl on the Train, Paula Hawkins

I didn’t expand an awful lot with this one, even though my sister, who reads mainly nonfiction books, wanted me to pick this up.  It went on crazy ebook sale last year grouped with a bunch of other popular books I was all too eager to gobble up.  Being such a hit, it had already made it to my TBR.  She just got it moved up due to having joined the ranks of those who just could not put it down.  I think she even said she stayed up to read it, which I don’t think is like her with a book.

This book is a page turner from the perspective of an unreliable narrator and a decent twist to it, which made it a huge bestseller in England. I found Gone Girl harder to put down than this one and I would recommend that first, but I would also recommend this as a thriller.

A Book Recommended by Your Local Librarian/Bookseller (Modern Mrs. Darcy): 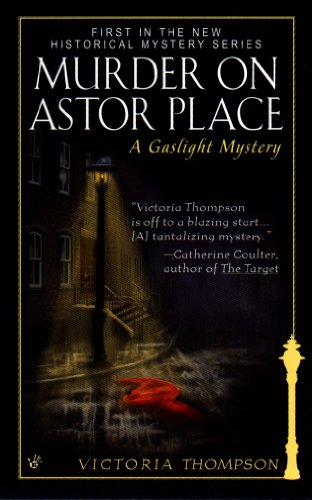 I have the pleasure of knowing the library director in my small town, so naturally I cornered her (at an annual local soup contest, no lie) for this recommendation.  Her blanket recommendation is usually Outlander, and seeing as I read Outlander last December as a vacation read to accompany me through binge exercising/crafting, she switched it up for me.  (sidebar:  I have not continued reading the Outlander series because I heard the later books have less sex and more anxiety provoking situations for the characters and she couldn’t deny this fact and she has read the series through at least twice).  But then she was like, what about historical fiction/cozy mysteries and I was like yes and yes.  And I can’t deny I like that the cozies run a few dollars cheaper.  This one is about a midwife in 1920’s New York City who figures out who murdered a society girl who was living under cover in a boardinghouse. I would read more of these, even though sometimes the history exposition woven into the plot seemed to be a little stilted at times.  I mean, I do like the trend of the setting being an active and relevant part of the story, so if it is a little stiff at times, I suppose I could handle that.  I would recommend Rhys Bowen’s Murphy’s Law possibly first, if you are okay with the fact that Bowen’s heroines always struggle to find a consistent place to live and a steady stream of income.  Both Molly Murphy and Georgianna Rannoch of her Royal Spyness series are always living at the brink of ruin.  At least Sarah Brandt in Murder on Astor Place has a consistent and reliable base for life and independence.  And the distinct advantage of straddling between the world of the poor, in the clients she serves, as well as high society, from which she comes.   I am also eyeballing The Yard by Alex Grecian.  But I have more reading list challenges to scale before that.

I am glad that all three of these books were placed in my path with very little soliciting.