Even though school isn’t out yet for kids in New York I consider it to be summer after Memorial Day.  We get such a sliver of time for the season up here as it is that needs to be extended as much as possible!  I have fallen hard in love with spring this year, leaving my previous love of fall.  Sorry, fall, you just usher in too many months of dark and cold for my taste.

I am finding that being asked to read memoirs, biographies and autobiographies on the reading challenges requires significant learning for me too this year. It isn’t that I don’t like human stories, I like the stories of the people I work with every day and the stories I can interact with and do something about. I struggle with this genre because I don’t really necessarily care about white men being powerful in the white world or about celebrities who use the time on their hands and their talents to make fools of themselves.  So I had to find memoirs and life stories that I felt mattered to meet requirements. 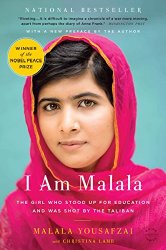 I am Malala, by Malala Yousafzai

The title of this book was super annoying before it was mercifully explained in the prologue.  I am not going to explain it here because who is going to read this blog if I just spoil everything?

Other that the tragedy of Malala being shot, I also found this beautiful book tragic in that parents have to silence their children for their safety. Malala speaks out because she is born from an idealist dreamer father who does not agree with some of the views on women where he lives. He understands how important her message is and how it would not go anywhere without his support. And of course, despite her accolades and winning the Nobel Peace Prize prior to adulthood, at the time this book is written she is living away from her homeland and in the gray, cold and flat, if a little more developed, country of England.   The story is a readable blend of her story against the political backdrop of our times. I also liked that it was not written to make any one culture or situation better than any other.  She is frank about both the problems and the beauties of her homeland and those that she experiences elsewhere.  She is a regular kid underneath her fiery words and brilliant mind and her will.  She loves her family and her home and her friends and all the things that make Malala Malala. I think this was a perfect book for me to read on politics and a culture with which I am unfamiliar and to care about the perspective being presented.

I just got done saying that I don’t much care about reading about the privileged and then for my autobiography requirement, also from Popsugar: 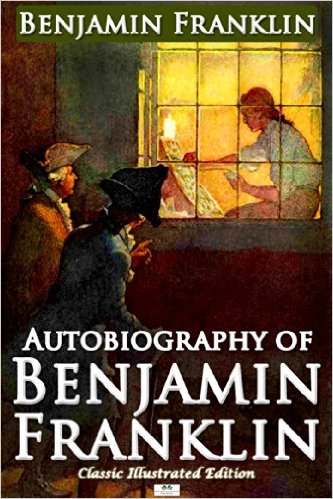 More positive and energizing that I expected.  Ben is privileged in that he has the means and freedom to set up his own business and do some serious overseas travel, but it seems that he uses his leisure and means to discuss and explore the betterment of mankind, via his political ideas or via his explorations and forays into science.  I gained more respect for him.  He advocates the building of infrastructure, starting with kindness to generate kindness. He talks about gaining power through finding common ground and generating goodwill. He wanted to make things more efficient, more amicable, with the same resources that could be found elsewhere in his Philadelphia.

I can appreciate a scientist who wants to advance the greater good, as I can feel that way too in my better moments. I have a little cynicism, however, regarding our founding fathers and the veracity of the glory they enjoy in our school textbooks.  I think like most of them Ben made children from women he did not marry, and indeed the wife he did have was commonlaw because he went abroad before he married her, and she got married to an unsavory character who left her and Ben rolled back into town and picked up the pieces, but I don’t think she was granted a divorce in today’s terms.  I mean, he did make an honest woman of her and he regrets not putting her on lockdown before he goes overseas, but I understand his caution by not doing that. He was still a kid himself who was trying to make his own way and needed to create some stability.  I think Ben was probably better behaved and more advanced that the lot of them, though. Anyway. I liked it and the ideals from which this country was intended to be founded, of course to the limit that our selfish natures allow.

Malala and Ben both want to see a better world, and interestingly both advocate for women’s education. They are both passionate political thinkers, although Ben also very much enjoyed natural science and considered himself more of a scientist than a political figure. So although these works might seem like a juxtaposition they have some common elements as well.  Think about Ben this week for Flag Day!

Sharing and comments are caring!