Update on the deer carcass from last week’s post: gone from the ice the next morning.  No sign save for some curious bunny tracks in the wisps of snow. I believe I have underestimated my local birds of prey.

Bustle books has recently had two posts on my Facebook feed about long books that are worth it. In my opinion, these are winter books, not beach reads. It would be too hard to wrangle a paper copy of Middlemarch and really get into the mood with your child digging ambitious holes underneath your beach chair while wearing your ‘I know I am a Mom but I am not dead yet’ swim suit. No, these long books are suggestions for coping with the dead of winter to be endured just before spring. They are for steaming mugs and cozy chairs and big blankets.

The layers of intrigue in Eleanor Catton’s The Luminaries was the perfect thing for my post holiday, back to work blues. Not that I took off any time for the holiday, but people either really want to come in when you have the time around the holiday week, or really don’t want to be bothered until January comes around. Typically it is more of the latter and affords me a moment to catch up.

I wonder at the synchronicity of the e-book version being on sale at Christmas when I had already been eyeing it for my 5 over 500 list this year. 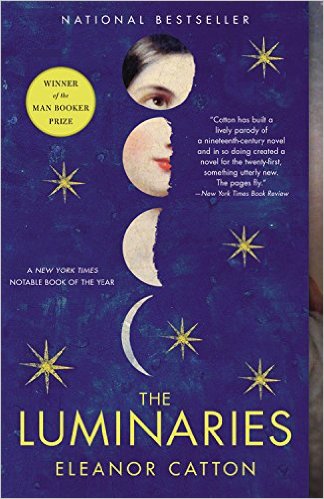 The first half has long chapters full of character exposition and I felt like I was peeling through the story with the layers of twists slowly and trying on my own to determine what happened on the night in question which 834 pages and almost thirty hours on audiobook is designed to address. A singular night involving what looks like three people: a well liked, opium addicted prostitute, a hermit, and a successful young prospector who vanishes into the night, and a fortune. These elements spin a web of characters who all have a hand in how that night culminated or from how it played out the next morning.

The second half clips along in pithy chapters of brilliant exposition.  As the story was slowly being unfolded I was wondering how it could be satisfactorily explained in the remaining number of pages but Catton does it without my feeling like it was slapdash or incomplete. The planning of the novel was part of its artistry. She started in the middle of the story and then grew it into the past and then into future events.

One person commented that they could not keep the male characters straight, of which there are many, so maybe the audio edition helped me with this.  My favorite character was the prostitute Anna Wetherell, who despite the situations she has found herself in is lovable and actually esteemed by the men in the town, despite their relations with her. She isn’t coarse and she is plainly just trying to survive and not let her lot in life defeat her. The two women featured in this novel are not so bored, trapped as they may be at times, as the typical woman struggling on the New Zealand gold rush towns could be.  There is a third who is also desperate to escape her entrapment and she is clearly traumatized.

The Luminaries absorbed me into a complicated world far from my own. That is what I need from this season of reading.  Good to listen to with an uncomplicated knitting project in hand. It was good also to read a solid example of plotting that is designed to build suspense and is thorough despite all the threads to weave.  I already own two other Man Booker Prize winners, The Narrow Road to the Deep North (winner 2014) and A Brief History of Seven Killings (winner 2015), which I am looking forward to tackling even more now with the example of Catton’s prize winner.

Did you tackle The Luminaries?  Leave a comment below!