The leaves are dwindling and the cold is becoming harder to ignore.

I have been putting off switching out my summer clothes to be replaced by my winter ones. I have been digging sweaters out of the off season bin when I am getting dressed for work like a guilty little sister in her big sister’s closet on a school morning.

I am so close to completing the reading challenge I am worried that I am getting bold. Spoiler for a later post: I chose The Magicians for the trilogy when I almost chose the Amy A Bartol YA trilogy.  The Magicians appears to be a lot more to read and listen through but it was so highly praised I had to be a part of it.

I think part of this challenge is to encourage readers to read outside their grooves, and I read two outside my groove and one completely in the rut.  The deepest part of the rut right in the center. The part that my high school economics teacher might suggest wallpapering.  I’ll start with my groove: 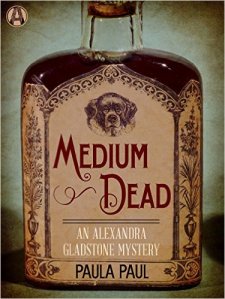 This book is, like, all my favorite things.  A cozy mystery, Victorian Era England, a woman practicing medicine, and spiritualism.  I really do just love the cover.  This is a series and Medium Dead is not the first, but I think I will go back and read the others, whose covers are not nearly as compelling.  It looks like Ms. Paul wrote a few of these before she did a cover change up.  I devoured this story in about two days.

A Book A Friend Recommended: 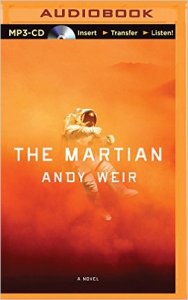 The Martian by Andy Weir

This book is so far away from my rut I couldn’t even see the rut when I was in the book. This is a complete and total boy book.  I should know better than to make that generalization as a Psychologist but it was recommended to me by my male best friend as un-put-downable, and I would recommend it to a few males that I have the pleasure of knowing.  This is all science and technology and intensity.  An astronaut is stranded on Mars.  Rugged survivalism. I have to admit that I did not understand every little bit of the chemistry and physics that are explained but I was able to grasp enough to understand where the story was going.  Even though it is far from my usual read I did have to see it through.  I have this pipe dream of watching the movie but seeing movies usually is ruled out in my world of work, reading, writing , crafting, and oh, parenting (I am not a bad mother.  Instead of posting last Sunday I was at a pumpkin patch with my preschooler, so there)  As a side note, I also enjoyed that there were many powerful and influential but still appealing female characters in this book. And some of the statements made by the characters are sharp and funny.  It’s a recommend, despite the deviance from my usual tastes (see book above.)  I was going to have The Boys in the Boat in this category, but it was moved to a book based on a true story. 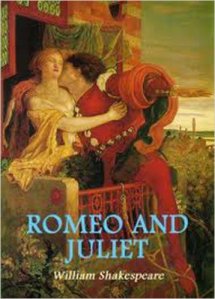 Romeo and Juliet by William Shakespeare

I caved and reread this play from high school. I typically do not care for Shakespeare but I already had experience with the play and I knew my impressions would be different as an adult. I remembered so little of it. It always is surprising that some of our great love stories of the culture are the most dramatic and unhealthy.  Romeo and Juliet follows suit with this.  Immediate love at first sight passions. I don’t know about others but that sort of thing never worked out for me.  I like the love stories better where women are loved for being different and spunky and have clear and appropriate expectations of themselves and others. Ha. Maybe I am just a ruiner.  This play was clearly written for more instant gratification, and that’s fine, but it really isn’t an example of a high and fine love, and I don’t think Shakespeare intended it to be. I think he intended entertainment.

I am particularly interested to see what covers people choose. I have seen some on the Pinterest and I think that that mine might not have universal appeal, despite my unexplained attraction to it.

What were your choices for these categories?  Leave a comment below!